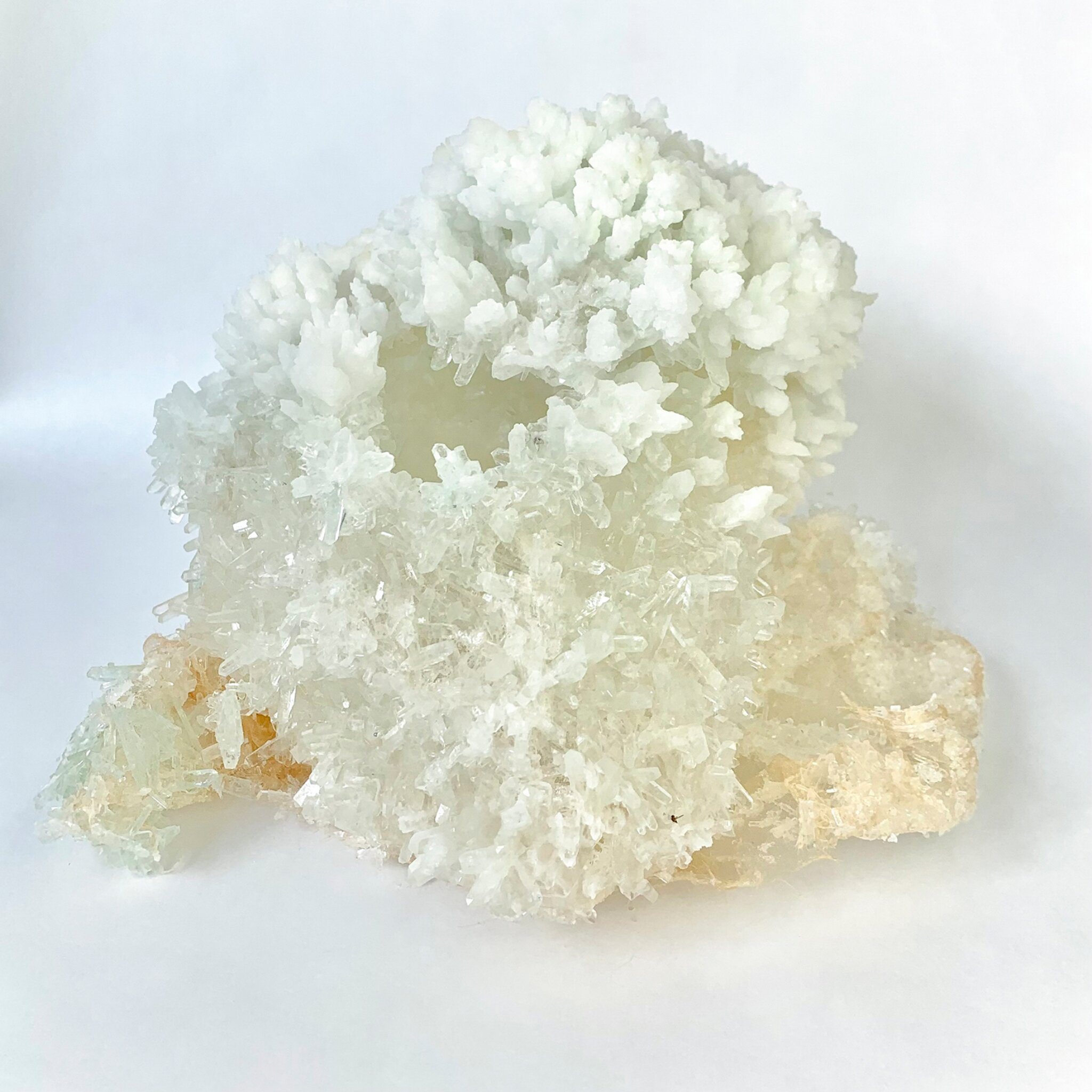 SP2 is pleased to announce the opening of Luz Peuscovich’s new solo show. The exhibition CHRYSALIS presents several series of works as the result of a two-year investigation of minerals and crystals.
The artist’s previous projects have emerged from her travel experiences: working with found organic materials from various sites, she has used these elements in the creation of an array of dynamic installation works. Her research has focused on the integration of human beings within the surrounding natural environment. By generating a movement away from the organic material’s usual context, the artist has sought to transform the perception of space so as to encourage novel ways of inhabitation.
A few years ago, while collecting materials in the desert of Contralmirante Cordero in Rio Negro, Argentina, Luz found a very specific kind of crystallised minerals. They were organic but especially stable and could withstand incredibly dry environments. However, over time, they could still sometimes undergo transformation.
In June 2019, she created a small laboratory in her home in which she experimented with different minerals, observing their crystallisation and seeking to discover their potential, guided by internet tutorials and various texts about mineralogy and science, as well as by alchemy. Diving into this fascinating process, she was driven deeper by her immense curiosity and the sudden impossibility of travel due to the pandemic. She settled herself in Berlin within a new shared studio-lab and became immersed in the research.
The process of growing crystals entails a constant element of surprise, since minerals are very sensitive to the environment - humidity, temperature and especially vibrations. All these factors have an effect on the ordering of the molecules that compose the crystals and also the possible changes over time.
Through trial and error, Luz observes and analyses the materials, facing the perpetual uncertainty of the result, constantly adapting and transforming her working process.
In her practice with astrology, Luz investigates our relation with symbols. The creation of symbols is linked with a process of healing, used as energetic inspiration for the exhibition pieces and as a way to integrate the knowledge and experiences within her practice. Astrology and alchemy have always been related. An ancient chemical and philosophical practice of creation and transmutation, alchemy engages both scientific and spiritual realms and serves Luz as a poetic foundation during the process of production of her works.
For this first exhibition on mineral research, Luz has chosen to show a multiplicity of experiments in different formats: “Catalog of minerals” is the result of her investigation of various minerals revealing a diversity of crystal shapes and colours. In “Talking about the stars”
Luz explores the crystallisation of fabrics by imagining the mineral composition of stars.
In “Edgeless mirror”, the artist embodies the crystals, thus creating fluid identities and hybrid creatures. Hybridisation stems from Luz’s research around the extension and transformation of perception. She uses masks, costumes and other hybrid elements, allowing genres and species to be blurred, and moving beyond established categories.
Seeking to synthesise her two-year investigation, Luz creates Chrysalis, a cocoon made of crystallised organic wool and organic elements that she collected as well as bioplastics made of algae and minerals. The chrysalis (from the Greek chrȳsós, meaning ‘gold’) symbolises the place where metamorphosis happens. It can be compared to the secret chamber of initiations, the matrix of transformations and tunnels. Even more than a protective envelope, it represents an eminently transitory state between two stages of becoming, the duration of maturation. It implies the renunciation of a certain past and the acceptance of a new state, a condition of fulfilment. The
chrysalis contains the potentiality of being.
The Great Alchemical Work is a process that aims not only at transmuting and refining matter, but also at metamorphosing the subject. In each stage of the enterprise, the alchemist integrates dualisms and creates bridges. Through this process, they acquire a higher level of consciousness and a state of harmony.
If we further explore the analogy with alchemy, the ‘philosopher’s stone’ sought by Luz isn’t only material; it is an impetus for transformation, a vital energy, and the awareness that Gold is the process.