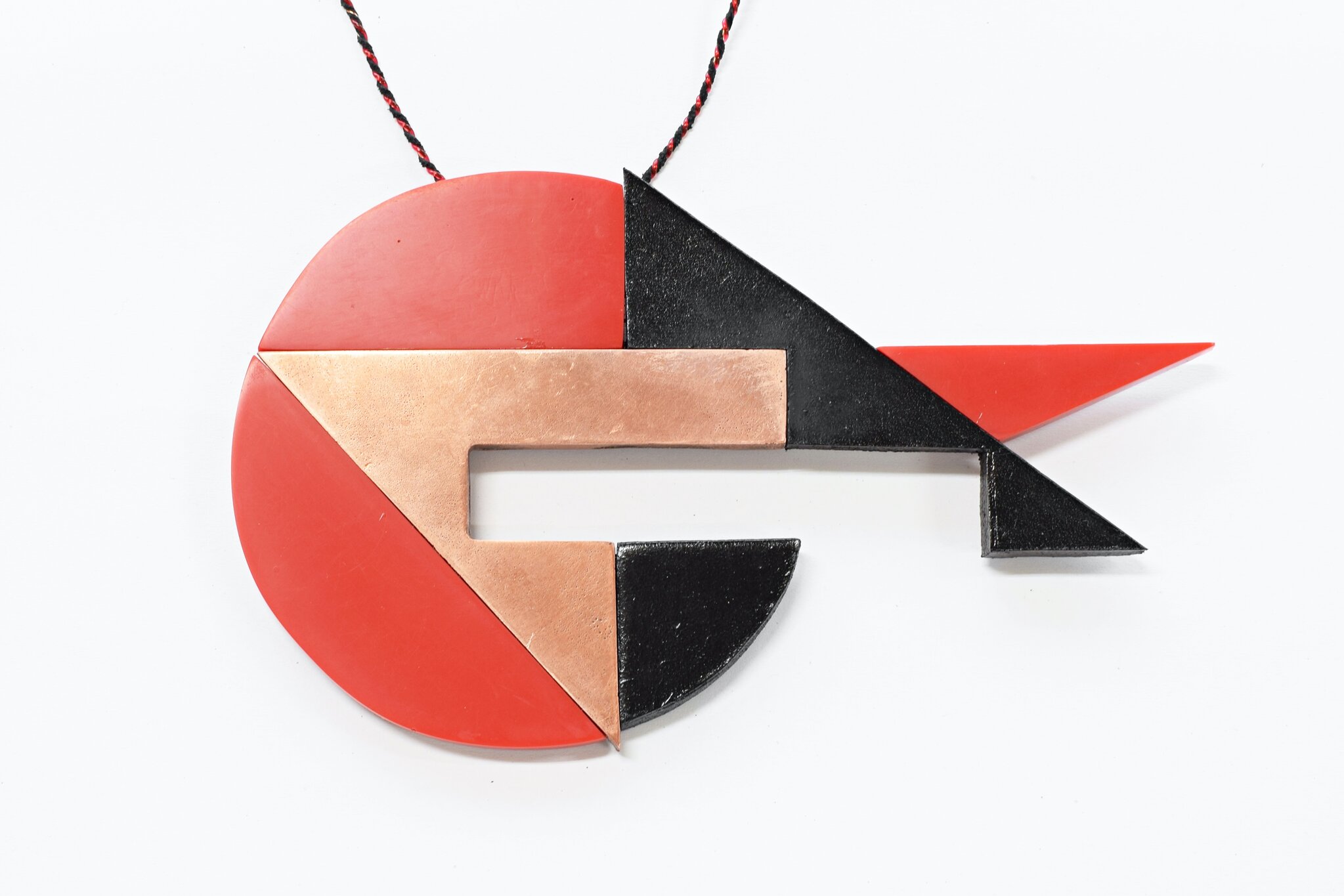 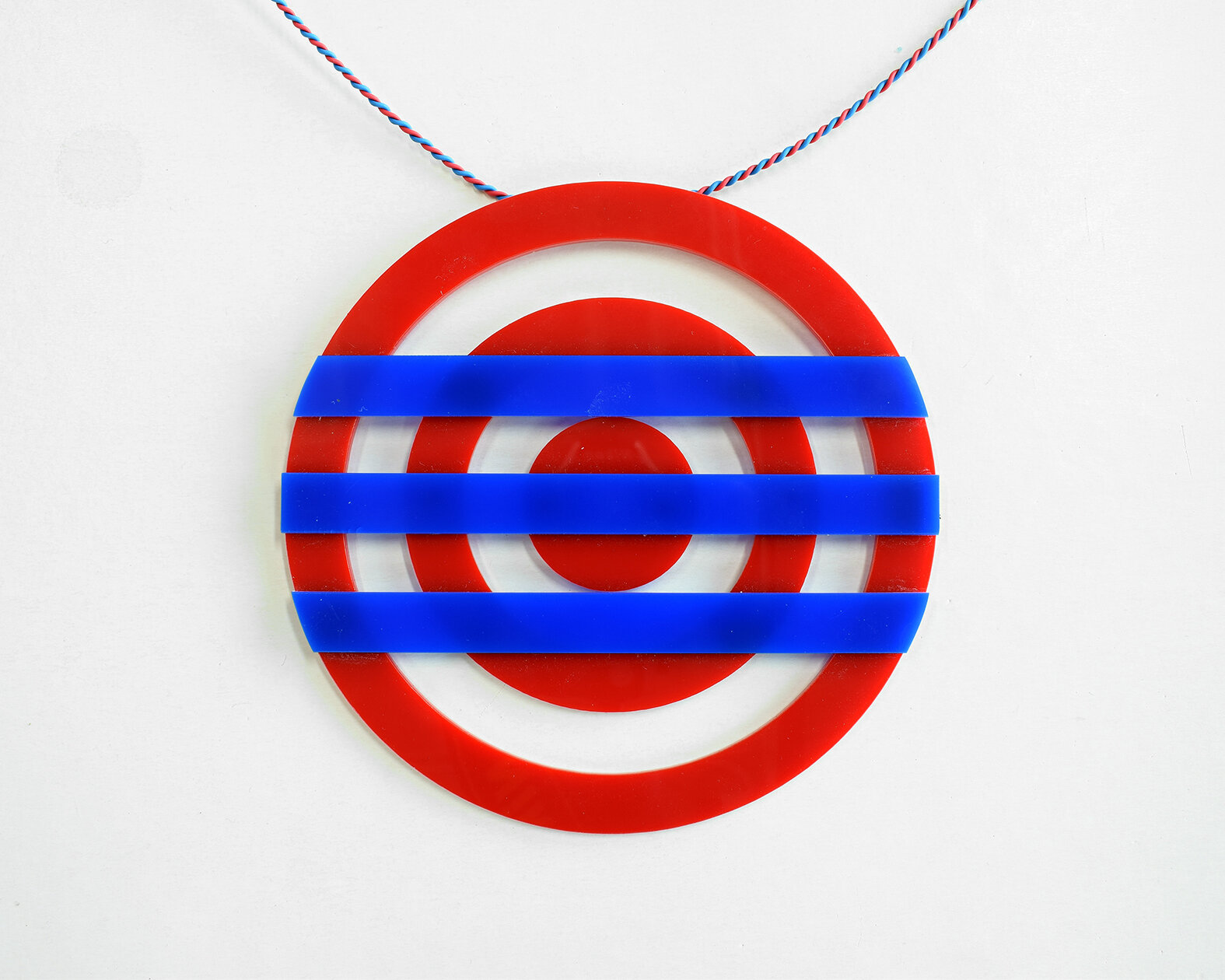 In his first solo exhibition at Open White Gallery, Rasmus Søndergaard Johannsen presents eight new
works. For their formal design he appropriated graphic shapes isolated from patterns designed by Russian
Constructivist artists for functional clothing in the 1920s. He deconstructed them into segments and
reconstructed them sculpturally in materials, such as silver, resin, copper, and steel, aluminum, acrylic glass
or gold. The decision which material is chosen for each section is based less on aesthetic criteria but more
on the material’s very own properties and thus function within the overall arrangement – copper is
selected as a basic chemical element for its weight to create the main focal point, patent leather for its
flexibility and lightness, epoxy to fill cracks and gaps – so that the “reciprocally connected parts [...] hold
an equilibrium”, as it says in an earlier work of his . In fact, looking at other sculptural works by Søndergaard Johannsen, the dynamic between different elements that together form a systemic structure
has been a recurrent subject in his practice – how do individual components of a structure relate to or
depend on each other? And how does their interplay or even interdependency affect the functionality of
the overall system? Thus, in the series Pivot (2012–2020), he addresses the relevance of the individual
part for the system as a whole. For that series, he isolated small but crucial components from complex
motorized systems and presented them defunctionalized as enlarged turned steel objects.
The Russian Constructivist patterns that served as references for the present series PATTERNS were
originally developed for clothing that was a manifestation of post-revolutionary socialist ideology – the
destabilization of the hierarchies, in society as much as between art, craft, and industrial production. The
so-called production artists applied abstract art, hitherto always considered the pinnacle of elitism, newly
to functional products of everyday proletarian life. Every profession should receive their uniform designed
to meet the particular functional requirements for their activity, and to acknowledge their part within the
societal fabric – form follows function. However, wartime poverty economically limited the industrial zeal
of the Russian Constructivists and their vision was never fully realized. Most of their designs have never
entered mass-production and circulation. The patterns have remained the manifestation of conceptual
ideas symptomatic for ideological principles for a modern socialist society, in which everyone works
productively, side by side, in an egalitarian society in which everyone’s labor contribution is equivalent.
The socialist ideology in which the original patterns were embedded is formally interpreted here. The
sculptures are composed of segments – every segment has its very own role within the configuration,
which in turn is defined by all its fragments and their interplay with each other equally. In this way, the
sculptures turn into metaphors for societal structures as envisioned by the Constructivists, an egalitarian
system of “reciprocally connected parts [that] hold an equilibrium”.
Rasmus Søndergaard Johannsen’s PATTERNS pay tribute to the concepts the original patterns stood for
and the female production artists behind these Constructivist patterns, such as Natalya Kiseleva, Ljubow
Popowa, or Warwara Stepanowa. Although they were the driving force of the production art movement in
the 1920s, they have never received the recognition of their male colleagues.
Søndergaard Johannsen appropriated the shapes formally, however, manufactured them not industrially
but crafted them carefully as unique pieces – as if to monumentalize them. But although the graphic
shapes in their new three-dimensional form appear to be necklace pendants, they are not comfortable to
wear due to their size and weight; thus, they cannot be considered actual utility objects. However, they
convey something fetish-like, as do objects to which properties are attributed that they do not really have,
e.g. by attaching personal memories to them, which gives them sentimental value.
As it is characteristic of his work, Søndergaard Johannsen once again followed simple but schematized
conceptual instructions to dissect cultural manifestations or those in nature, fabulating on their very
essence and drawing new analogies and interpretations. His ambiguous sculptures challenge not only the
hierarchy between visual and utility art (design) as their ancestors did but also that between sentimental
and material value – How does the sentimental value of an object relate to its status as a work of art?
Text: Anna Goetz 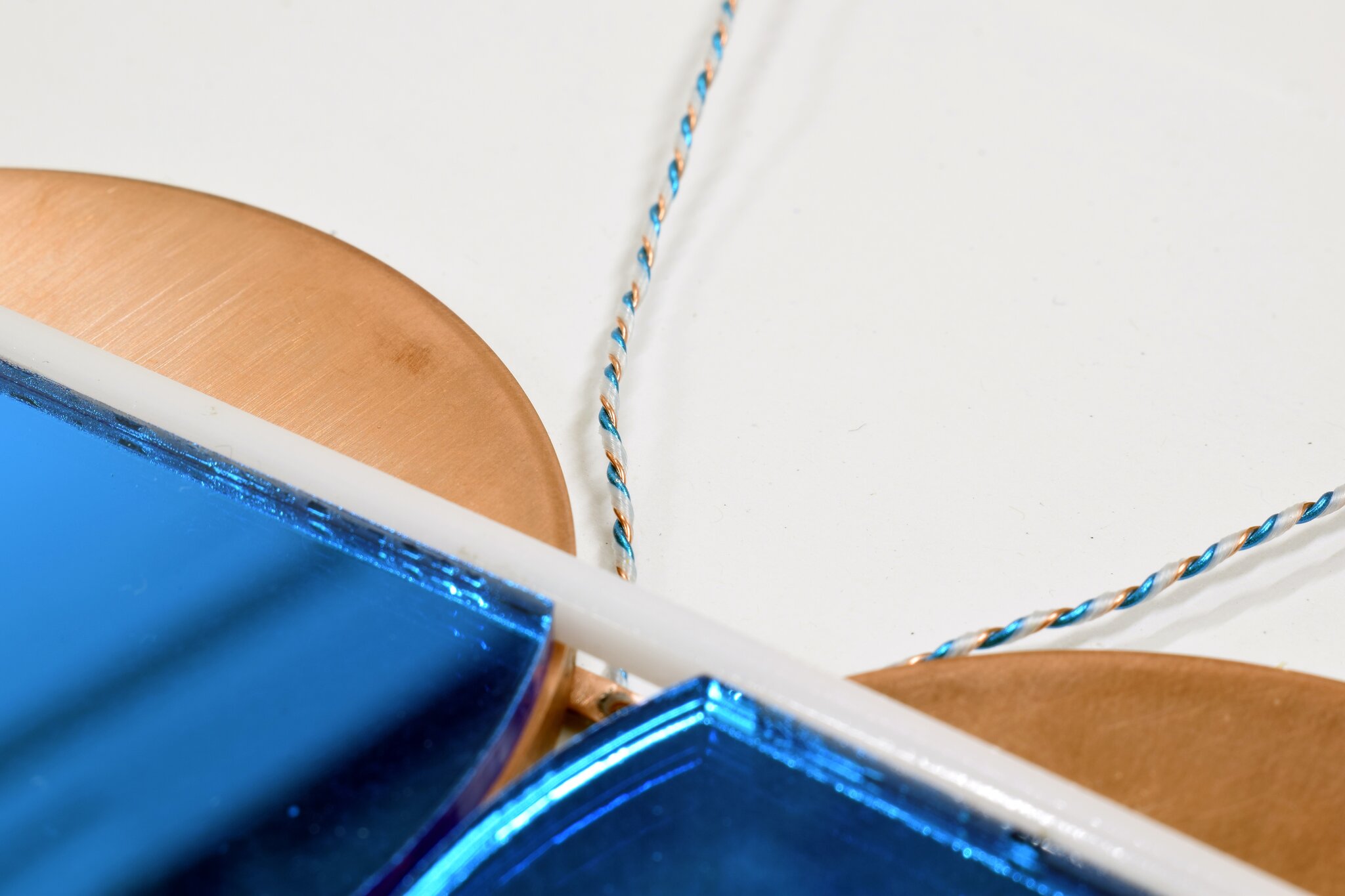