If you don't praise your home, it will crumble and kill you, 2020 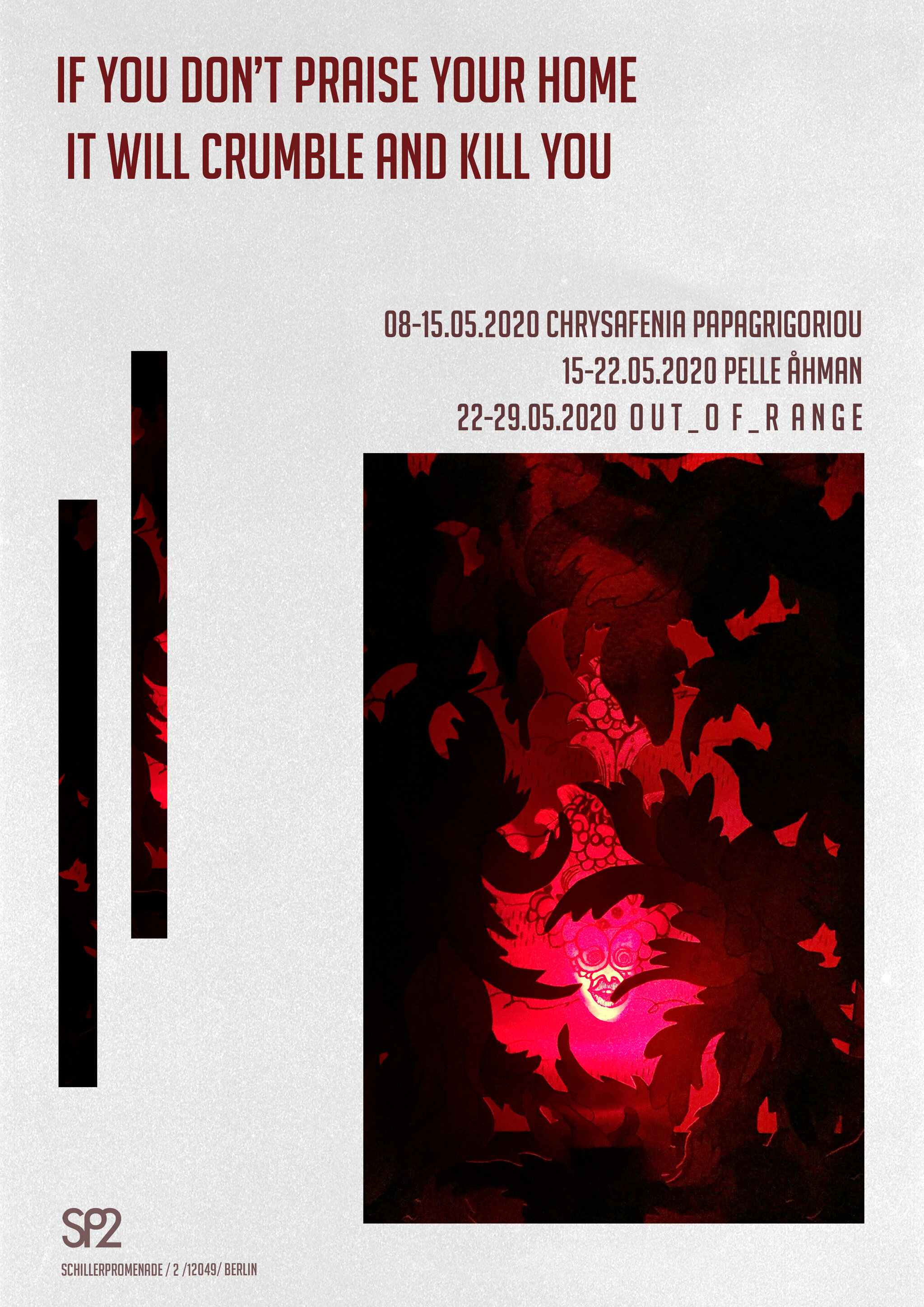 During the month of May 2020, amidst quarantine, SP2 welcomed Chrysafenia Papagrigoriou to curate a group exhibition related to the issues of time extension, contextualised in a confined booth, visible from the street.

Through the gallery window, we exhibited works from four artists, splitting the exhibition in three consecutive parts.

Undeniably forcefully, throughout this first lockdown period and as a result of the prolonged uncertainty, perception of time became a territory unknown. Subsequently, a sort of inevitable fluidity became a tool, with which to cope with the dubiety of the present and future.

The exhibition concept naturally reflected on that omnipresent notion during which the indoors/outdoors ratio was defied.
We put the exhibition on display only, in an effort to overcome that limitation and erase the border of day/night and “open/closed” where the artworks can breathe along with the public and vice versa.
By inflating and deflating space and time, within a construction of reflections, elements in assumed stillness seemed to acquire dimension. In this context, intimacy and distance were also challenged so as to synch with the space and time palindrome.

Chrysafenia Papagrigoriou is an Athens born and Berlin based artist. During her Mixed Media Fine Arts studies in London she explored sound and video as her main media but has spherically shifted over to 2D in the recent years. The works are “brought there” as a result of her previous practice. This is also her curatorial debut.

Pelle Åhman (Uppsala, Sweden) is a master of creating multi-surfaced mindscapes of interchangeable latitudes, in mixed media. The psychonautical, surrealist exploratory intention is always present throughout his body of work and seems to shed light on different aspects of a greater, ever-changing and vast world in each piece. Almost as if when we put all of his work together, we would assemble a map of his thought process. Simultaneously, that mental language remains individual and unique for each viewer to cultivate. Part of the brilliance of the work is the irresistible amount of observing that one needs to do, so as to draw the evidence to visualise that greater view. Pelle gives plenty of space for that observation to take place as his work contains colonies of details that they themselves could set off other new possibilities/worlds. That’s what renders looking at Pelle Åhman’s work an endlessly intriguing activity.

OUT_OF_RANGE is the collaborative project of Berlin based visual and sound artists Alexandra Macia (Spain) and Enrika Muta (Lithuania).

The duo bravely dives into the experimental terrain, exploring their media and has already presented notable installations in galleries and institutions around Berlin.

“HYDRAMORPHOSIS", made specifically for the exhibition, is an installation audibly and visibly depicting a dynamic sequence and its behaviour within its environment. The input here is the movement that is being generated by motor powered metal springs in a water tank, amplified by hydrophones. Translation to image comes from the camera signal, filming the object, shown on a TV monitor next to the tank. Those signals (audio and video) designate the vibratory flow dictated by the motion of the object through the water and its density. Through the SP2 window the viewers could see the phenomenon unraveling in the physical space and experience the sound though the headphone input found outside, using their plug-in headsets or the radio app for android users on 107.7 fm. 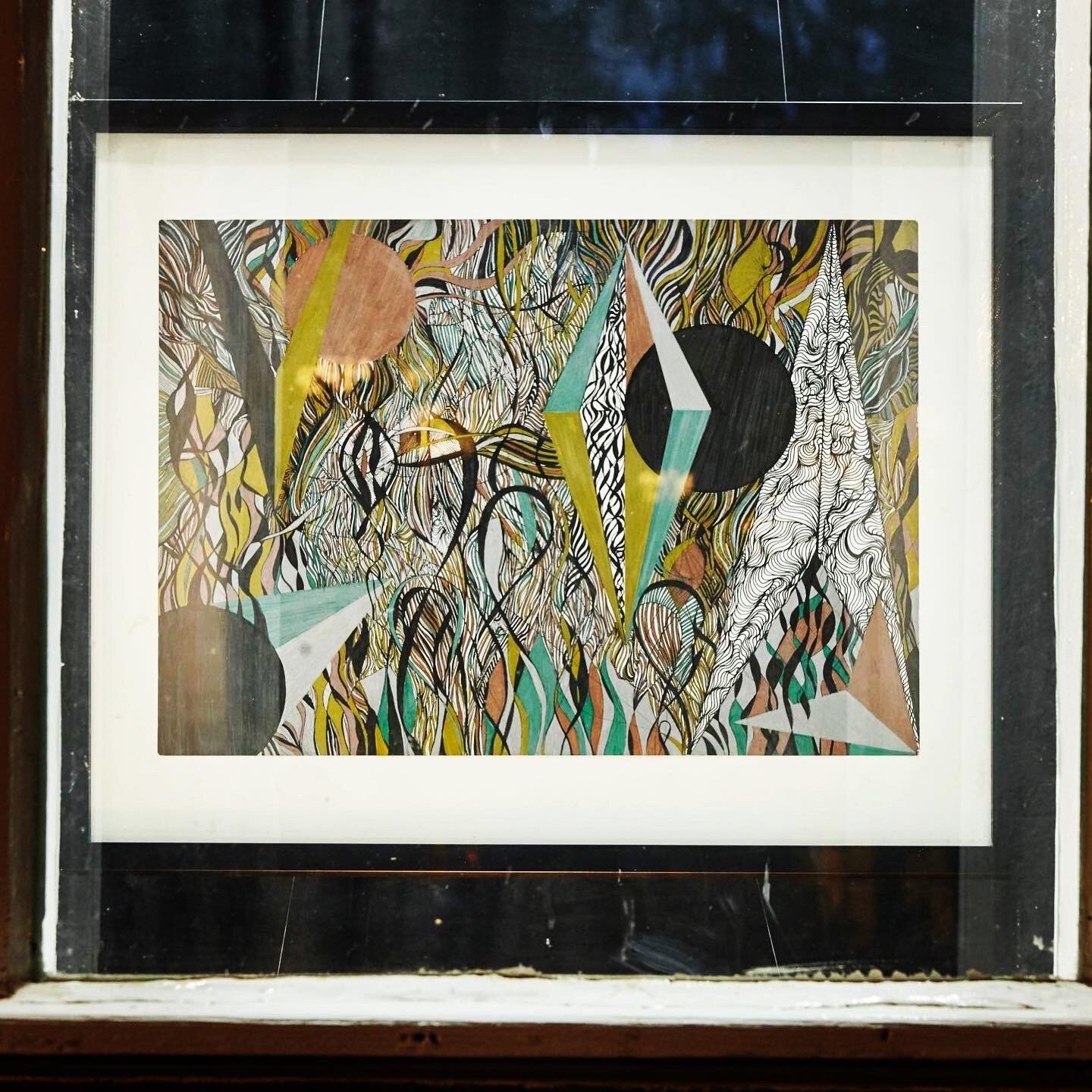 install views from "If you don't praise your home, it will crumble and kill you"